It’s that time of year again!

It’s been a long wet summer, and we have been starting to see horses with Potomac Horse Fever(PHF) here at WVC.

Potomac horse fever is a potentially fatal gastrointestinal disease that strikes in the late summer months. The disease is infectious, but not contagious between animals. It can effect any breed, sex or age of horse.

It is a disease caused by a microscopic bacteria that grows and multiplies in fresh water. The bacterium, called Neorickettsia risticii, has a critical step in it’s lifecycle that involves snails and insects. It is suspected that horses ingest the insect and bacteria accidentally while drinking standing water or grazing nearby.

While the most common signs of PHF are fever accompanied by loss of appetite, lethargy, and severe diarrhea. Here is a list of the many clinical signs.
• Depression
• Anorexia (not eating)
• Fever
• Colic
• Soft manure/diarrhea
• Dehydration
• Laminitis
• Abortion (occasional)
• Death

Prevention includes limiting exposure to freshwater streams, ponds, dugouts, or other natural water sources especially when insect activity is at its peak. There is a vaccine available; however, PHF has many different strains, which can cause the vaccine to fail as there is only a single strain in the vaccine.

PHF progresses quickly and can be fatal, however it can be treated. Survival rates depend strongly on quick intervention. If you notice your horse is a bit “off” or is showing the above signs of PHF give us a call. 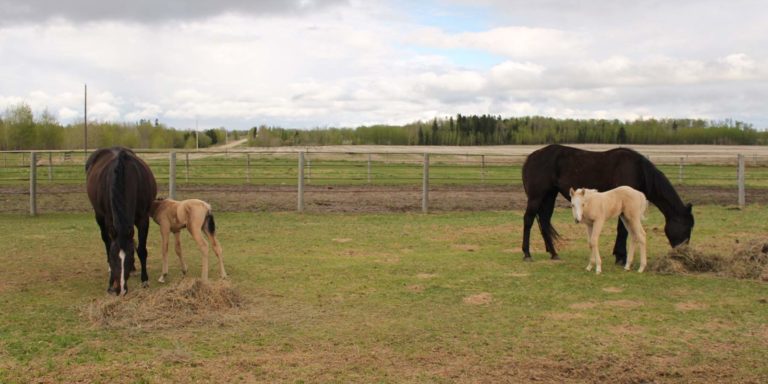 Have you been thinking about horse vaccinations and parasite prevention?   We understand that with rapid developments in vaccine technology and a seemingly endless array of products on the market, it’s often hard for horse owners to know where to begin.

We are here to help!

Deciding what vaccines to give your horse, boils down to a few factors so therefore, an effective equine vaccination program begins with a discussion with your veterinarian!

Core vaccines— recommended as minimum requirement for all horses.

Other vaccines– recommended based on the use, housing and travel schedule of the horse.   Often the following vaccines are recommended in addition to the core vaccines:

Some vaccines are recommended based on specific risk or situation/outbreak:

Every herd is different. Parasite load is directly related to stocking density, management practices, and individual variation. Fecal testing is highly recommended before deworming to assess the parasite level of the horses in question and whether or not deworming is required. With good management practices, the amount of dewormer required can be reduced.